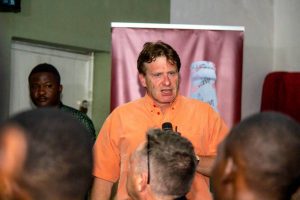 I have a dream! Definitely not Martin Luther king Jnr! but Nigel Hyde. Since 2003, together with his team has impacted Sierra Leone in various ways starting with the construction of the city of rest to the Saint George’s old people’s home.

Still toiling on to fulfill his calling from God and with the need to help just one more, he realized the appalling conditions Sierra Leoneans were subjected to, especially those that resides in the slums. Engulfed with fear that the next epidemic will hit them first, government laws won’t be in their favor or the heavy down pour of rain will drown their hopes again to rock bottom but more fearful that any relocation plan may strip away their livelihood, became resistant to any such initiative.

Amidst this fear, Hyde’s Home Leone initiative created a relocation plan. This time not only relocating homes and families but destinies. This safe haven located at Newton is indeed a hub for a better life, with low cost houses and the necessary social amenities. He had a dream and now he is restoring lives.