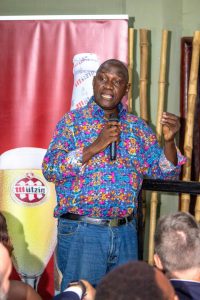 Mr. Bah is known as a man that has great passion for trees.

This vibrant and an energetic Sierra Leonean left this country 20 years ago and decided to return in 2017 and establish his own tree planting business. He has had a passion for tree planting since he was a boy.

At the of age of five, he would go in the bush and make a garden their just to plant trees.  Later on, when his family built a house he planted all the economic tress in their backyard. One of his most favorite quote is ask “not what your country can do for you but what can you do for your country?”

On his return to Sierra Leone, his ambition is to start planting tree which he thinks is a good thing for the country, and with trees planting he will be able to beautify the country. Further, tree planting with greenery will also help in reforesting the country ecosystem and he will be engaging youth and communities. For instance, schools and universities in various field to adapt the culture of planting trees and by so doing, he will protect the country from deforestation which has led to disaster lately like the landscape and flooding.

It is worth noting that some of tree species fight against insect like the neem-tree which is also a medicine for human beings. There are other species that can protect the country ecosystem as well said Mr. Bah.

As for now, Mr Bah has over over 100,000 seeds which 80,000 are at his nursery at Kent village which waiting to be transplanted to various locations.